"The Jewish Wardrobe" part one

The Israel museum in Jerusalem is currently running an exhibit called the “Jewish Wardrobe”. Part of the exhibit, displays beautifully ornate costumes worn throughout the Middle East by Jewish men, women and children ranging from countries such as Afghanistan, Iran, Iraq, Algeria, Morocco, Libya, and Tunisia. The clothing underscores the roles of ceremonial dress in life cycle events. 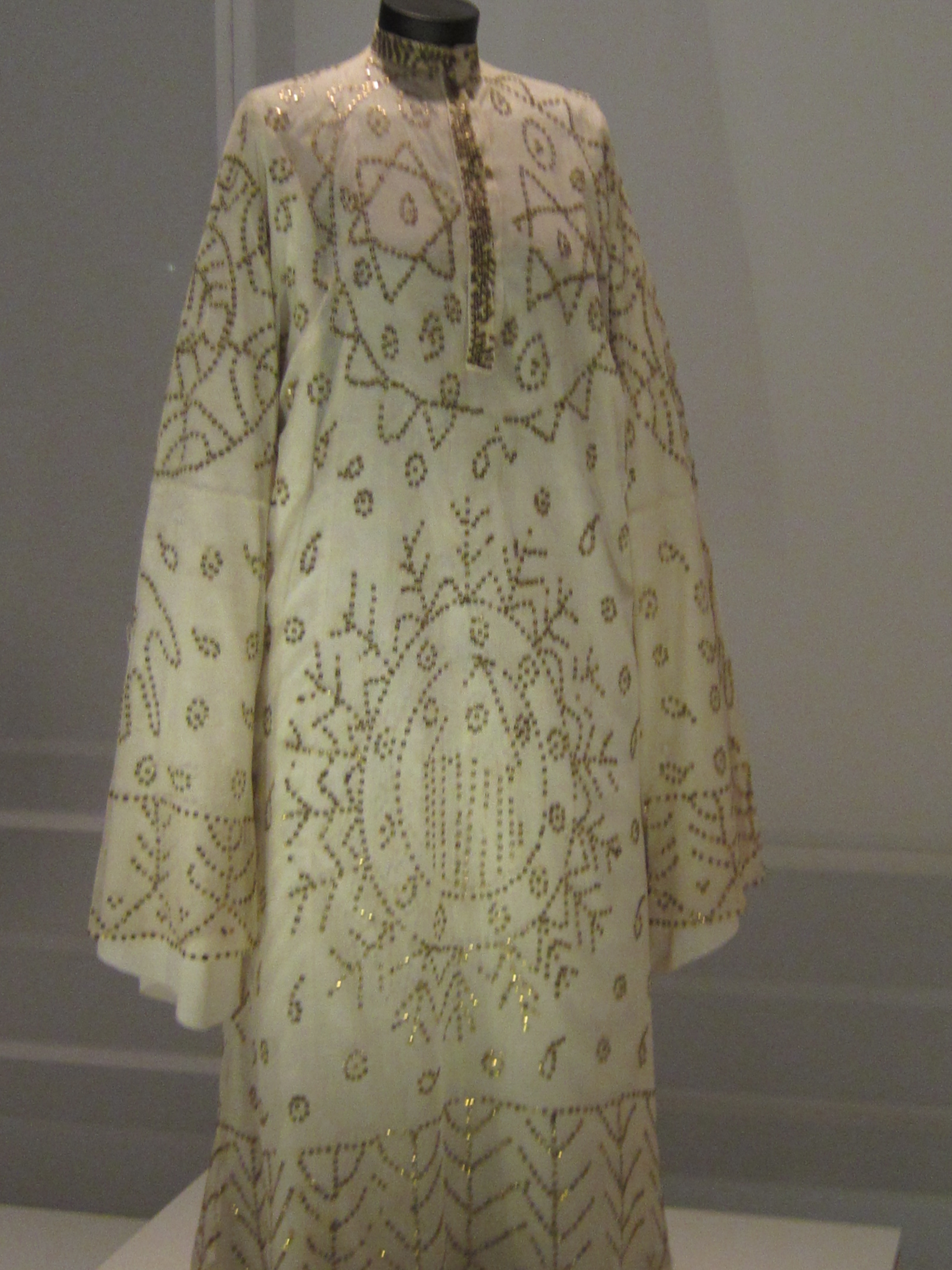 In Sana’a Yemen, the “Lulwi” ceremonial dress worn by women for receiving guests after a childbirth would subsequently be used in her shrouds upon her burial. Thereby the fabrics of her life are recycled signifying the two main cycles of her life: birth and death. 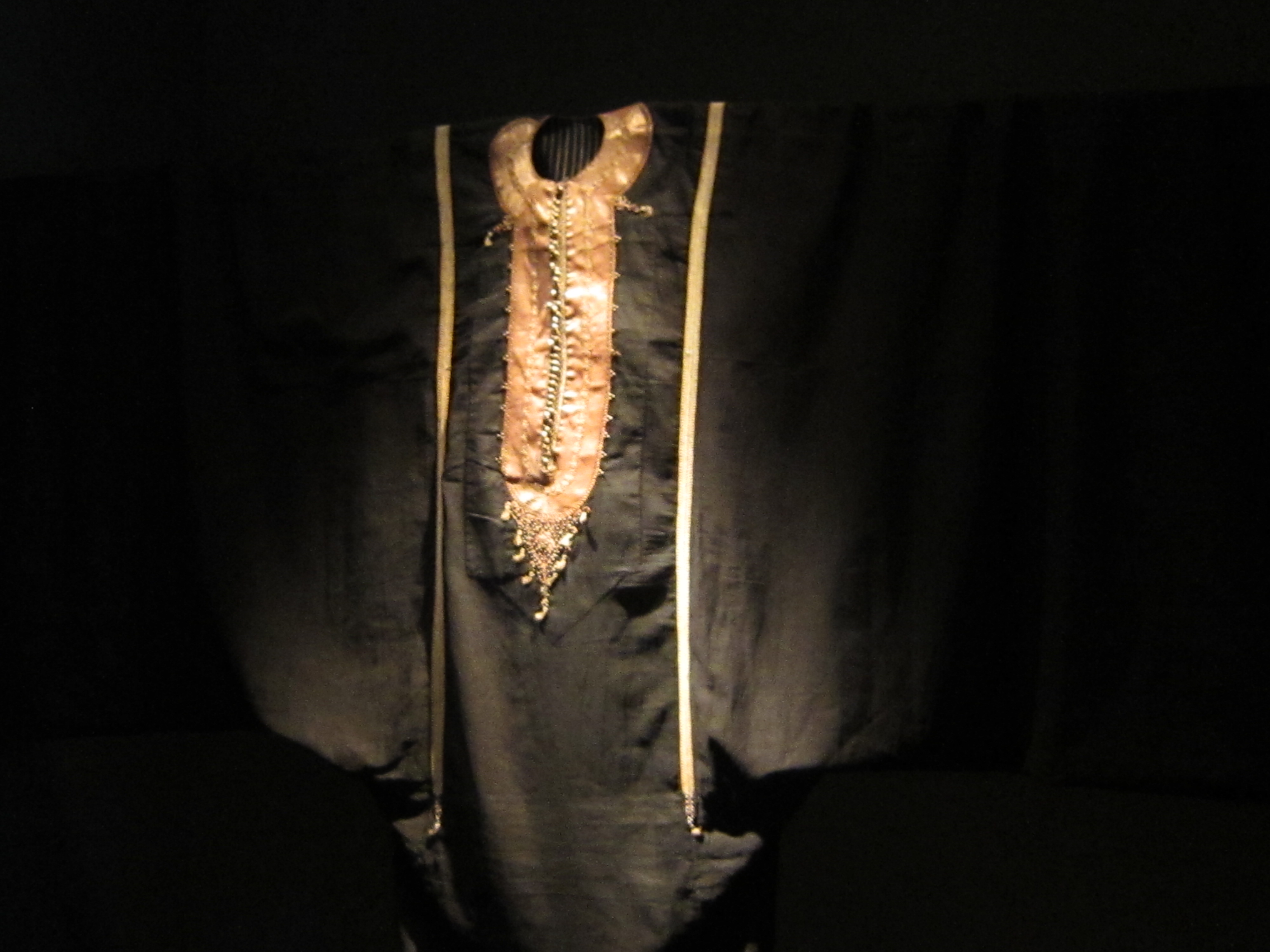 Other times, such as in Baghdad Iraq, the robe or gown the women would wear upon her wedding day would later be used to create a beautiful Torah ark cover. What is the connection of the wedding day to the Torah you may ask? Once more the garments represent the well-known metaphor that when the Jewish people received the Torah from Har -Sinai (mount Sinai) it was like a wedding day between men to G-D. The Torah symbolizing the wedding ring. The groom being G-D and the Jewish people representing the bride. 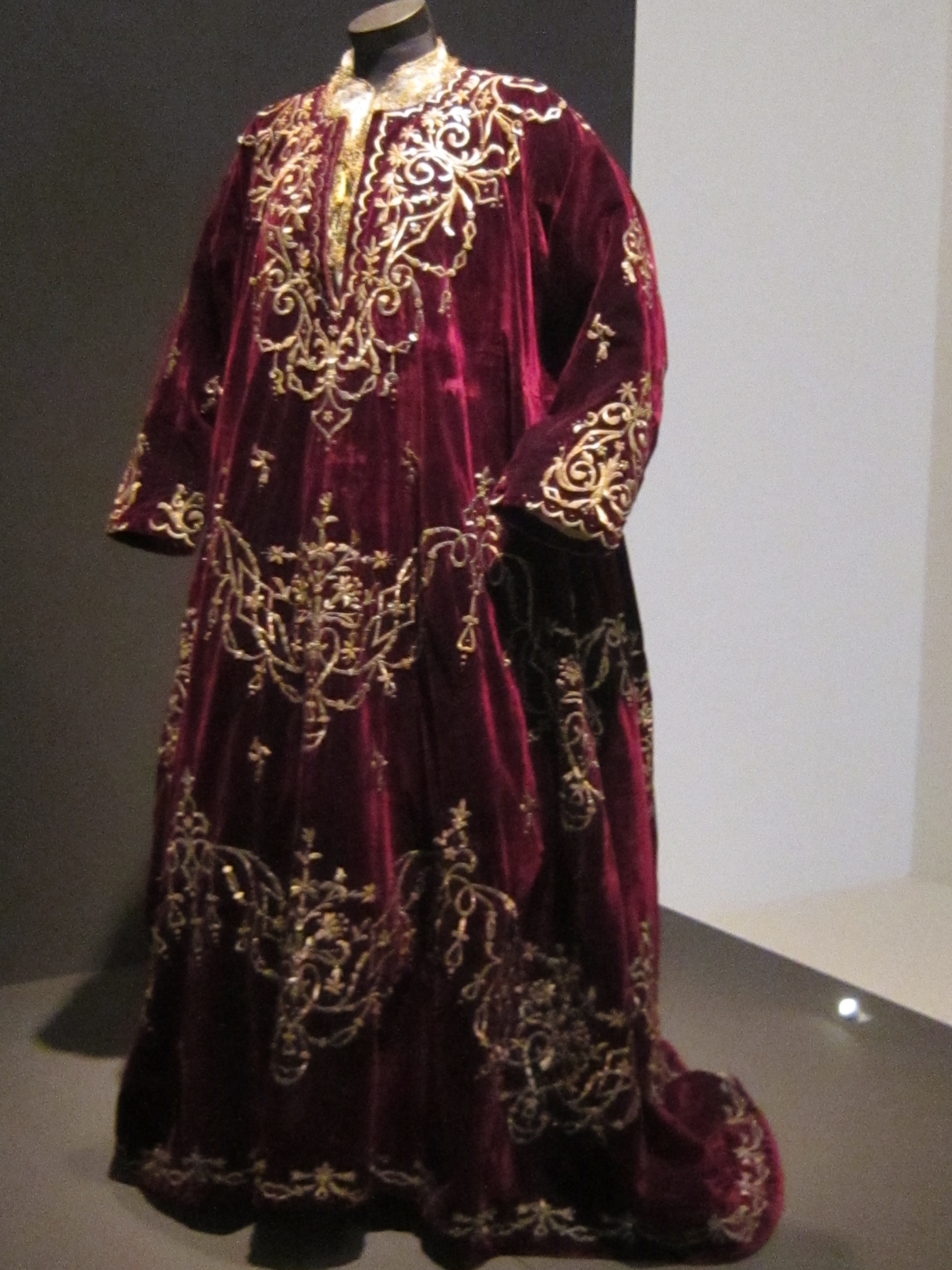 Women in Uzbekistan and Georgia were given black/crème printed silk head scarves as part of their wedding trousseau and those would subsequently be used by her when in a mourning period as well. As for Persian and Bukhara Jews, family members would bring the mourner new clothes at the conclusion of the year, to help them move out of mourning. 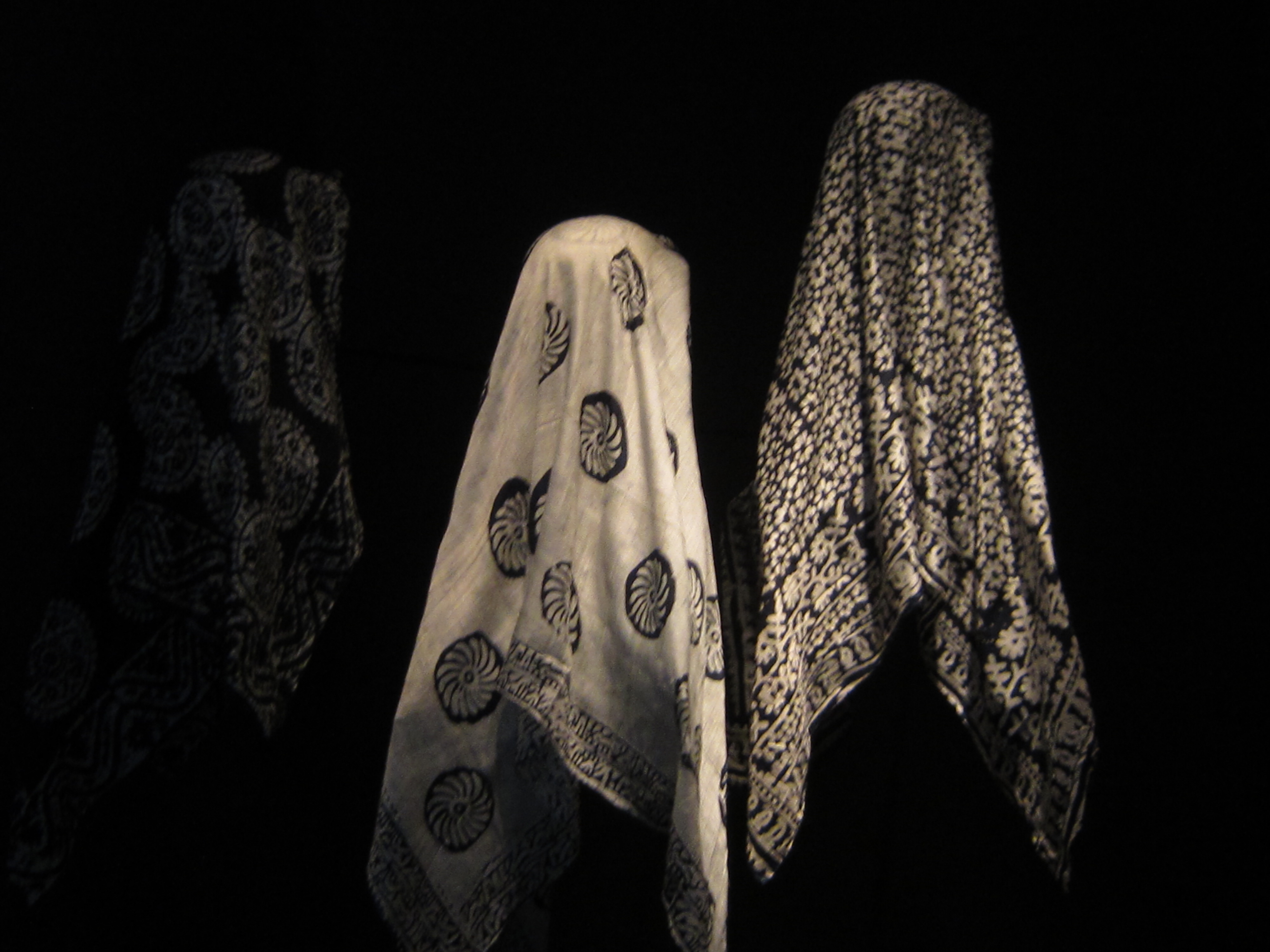 It was most interesting to see how communities such as Baghdadi Jews and Egyptian Jews would dress their sons for circumcision in gowns to look like girls in order to confuse the angel of death and ward off the evil eye so no harm should come upon the baby boy upon circumcision. The gowns/dresses were often made of silk with ornate tinsel embroidery of gold. 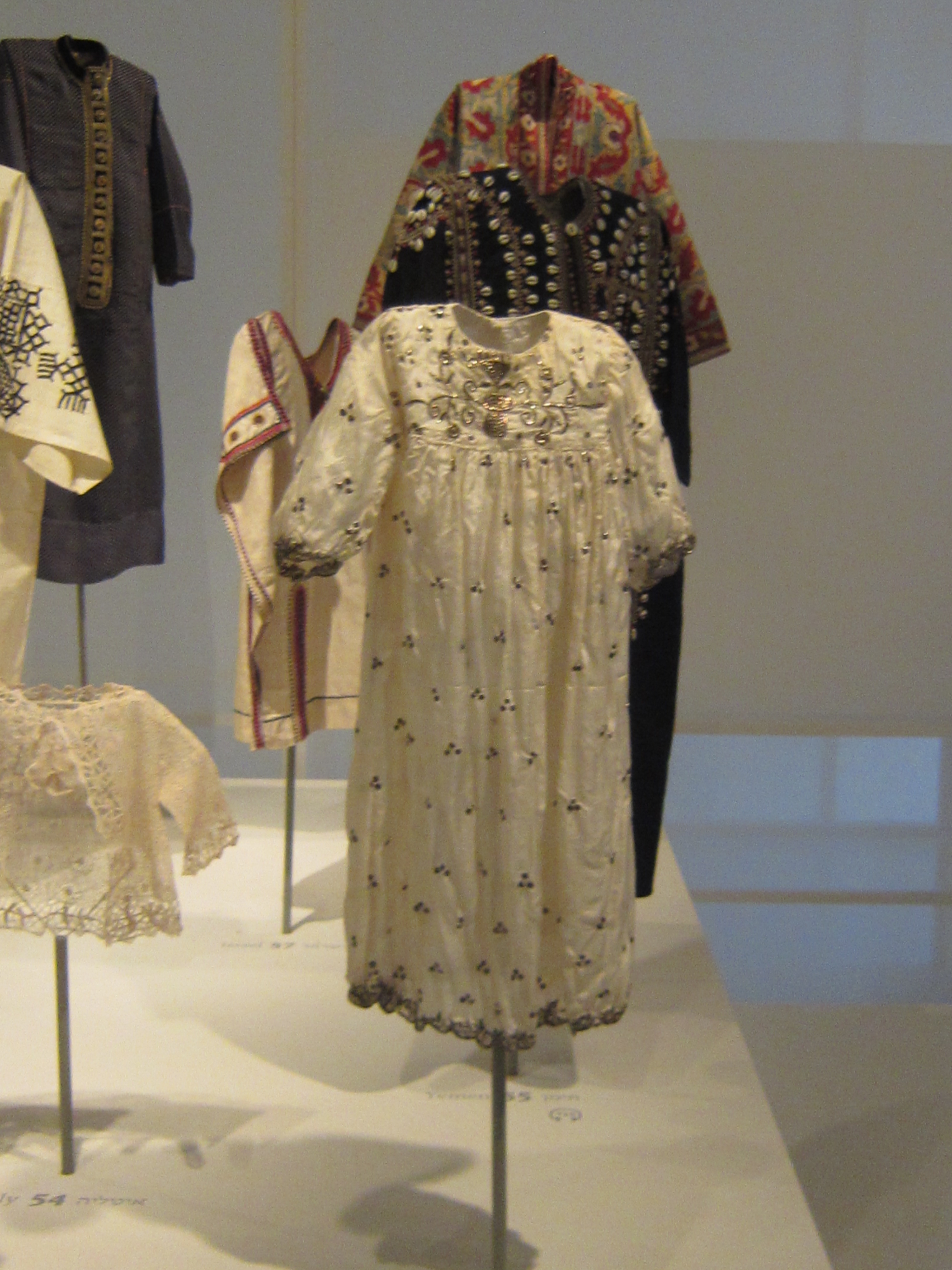 Jewish men are instructed to wear a “Tallit Gadol”- prayer shawl daily as well as Sabbath and holidays. The Ashkenazim wear the “Tallit Gadol” after they are married. The exception to this rule for Ashkenazim is the Jewish boys from German decent that wear them prior to marriage. The Tallit is a rectangular fringed shawl that covers the neck and shoulders and typically extends down the back. At times they cover their head with it as well depending on the occasion and the wearer’s custom. The meaning attributed to the tassels are explicitly stated in Halachic texts and is mainly expressed though non -verbal gestures like looking at them and kissing them or using them reverently to touch the Torah scroll.

In some communities, such as in Germany, the men wore very ornate Tallitim (prayer shawl-worn over the clothing) in the 18th and 19th century. They were often made of silk damask, applique panels and ribbed brocade. 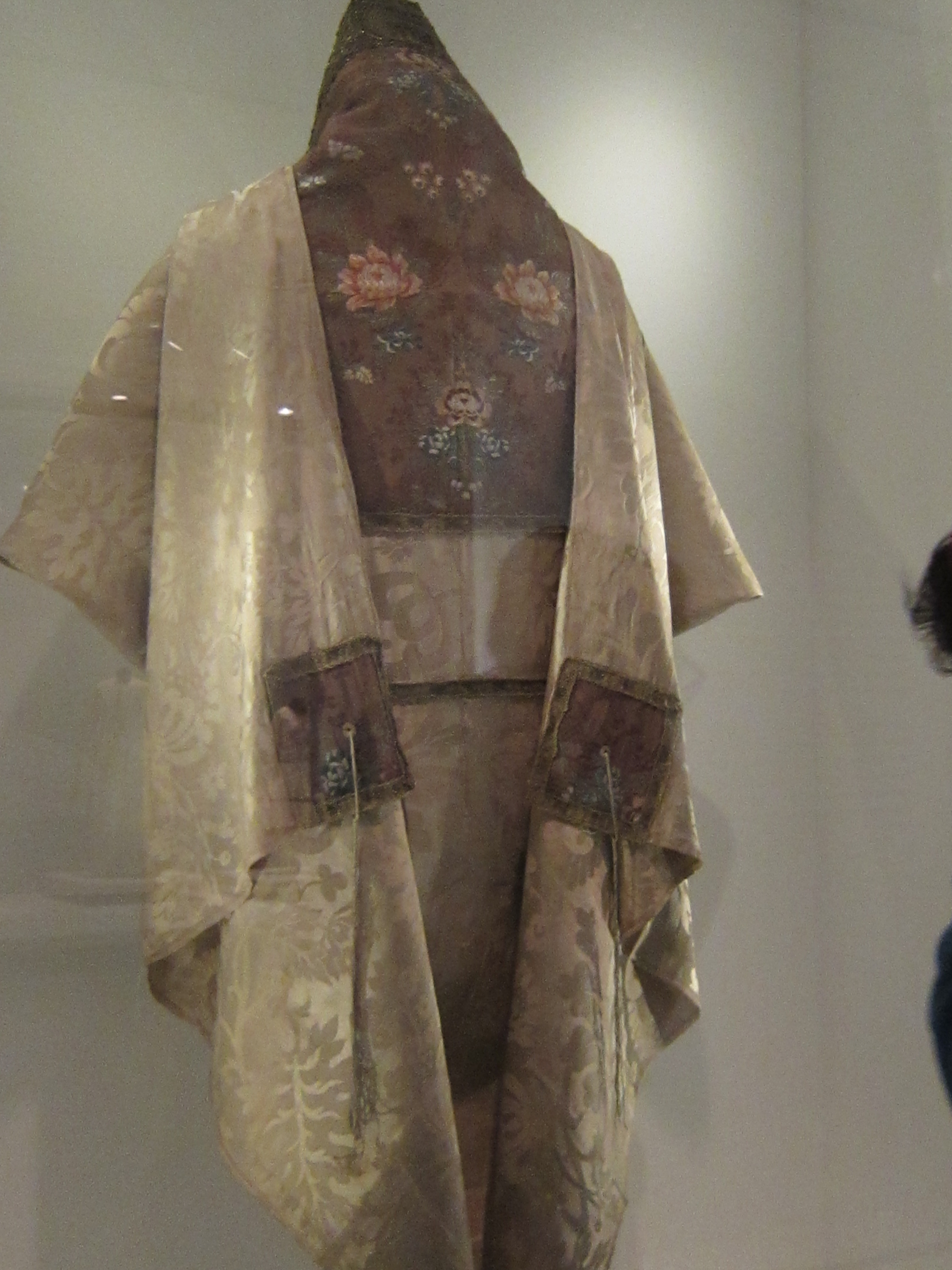 The Hassidic Rebbes whether living in Jerusalem or New York often wore and currently wear very festive looking Sabbath coats over their sabbath suit pant and shirt. They are made of silk, velvet bands and applique. 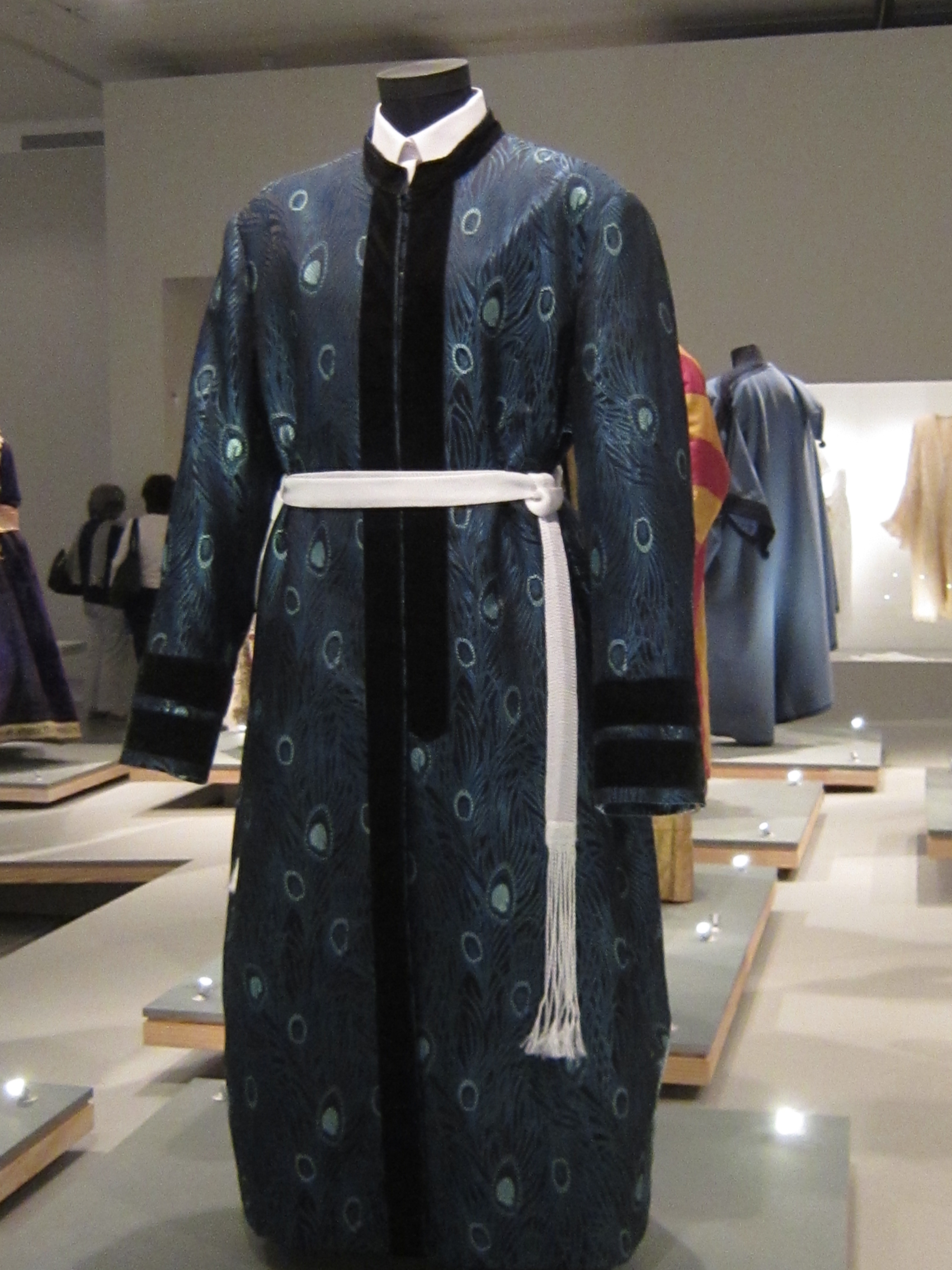 The belt worn over the coat, is not just served as an accessory, but has a deep symbolic meaning pertaining to modesty and procreation. Belts send a message- they divide the body, they conceal and protect the procreative organs. In Jewish religious practice, they separate the upper part of the body considered spiritual and pure from the lower part, considered impure and mundane.

Women too wore the belt to separate the upper body from the lower body. The belt also reminded women to be modest and provided protection symbolically for the fertility organs. Belts sometimes indicated the personal or social status of the wearer. In rural and urban Morocco Jewish and Muslim women, newly married women wore elaborately woven belts. Like hair coverings, these belts reflected the status of a married women. On Shabbat however; the Jewish women took off their belts wishing to be distinguished as Jews on that day. 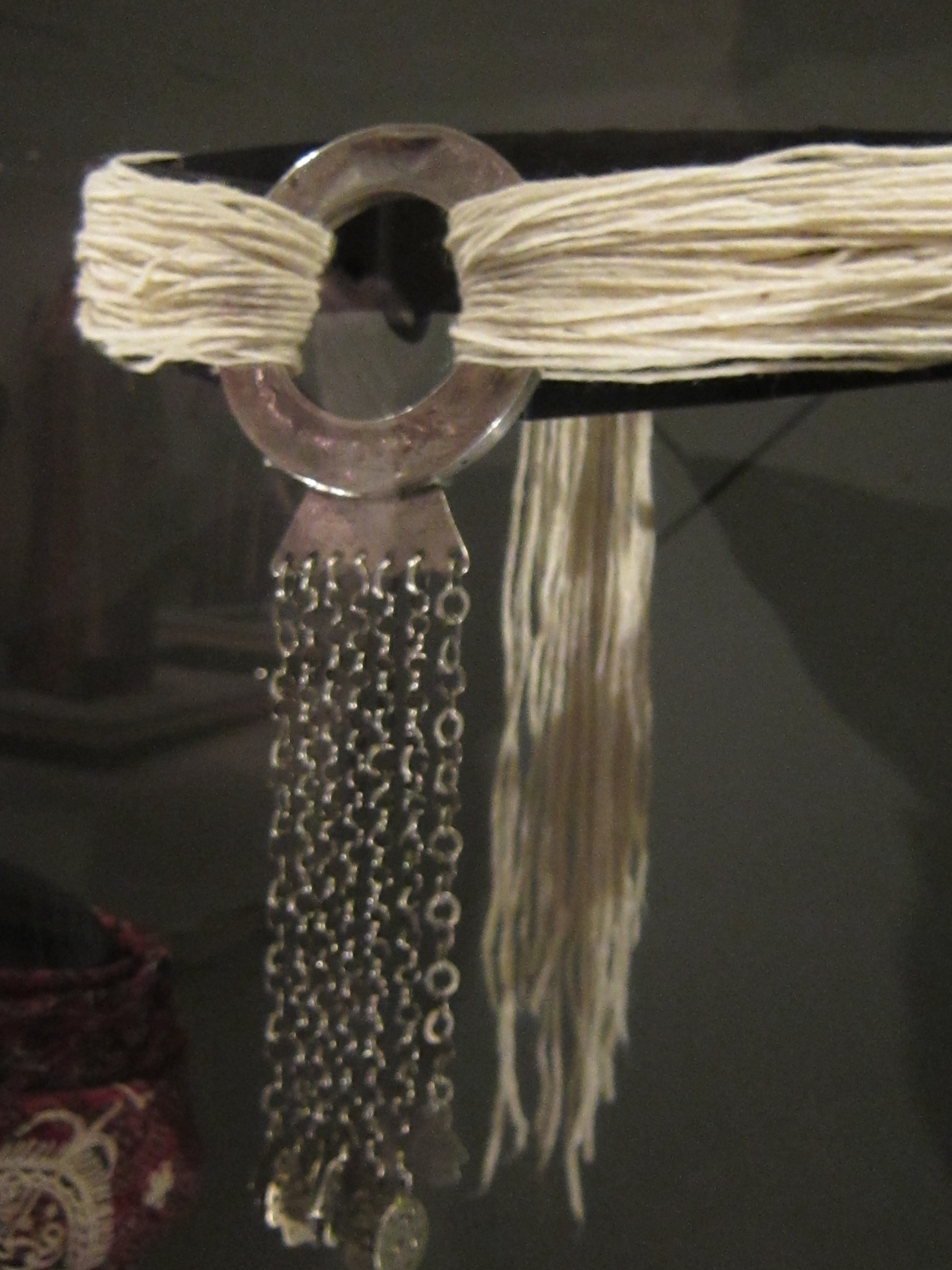 Please read part two for more on The Jewish Wardrobe.